Chicago, IL – A small study could have big implications in the battle against age-related cognitive decline and dementia, according to research announced today at the Alzheimer’s Association International Conference. The study was conducted by researchers at McGill University and Posit Science, and showed—for the first time ever in humans — that a particular type of brain exercise can increase the ongoing production of a brain chemical that is critical in addressing Alzheimer’s disease.

The brain chemical is acetylcholine, a neuromodulator, which the brain naturally produces at the moments when it needs to attend to information, and which is critical to memory and learning.  Typically, the production of acetylcholine decreases with aging, and is more dramatically decreased in people with age-related cognitive decline, pre-dementia, and dementia.

The most commonly-used drugs to combat early stage Alzheimer’s are cholinesterase inhibitors (e.g., Aricept, Exelon, Razadyne), which decrease the rate at which the brain breaks down acetylcholine, leading to higher levels of acetylcholine in the brain. This strategy has been shown to mildly slow the decline associated with Alzheimer’s disease, but typically the benefits from this strategy are not sustainable over time.

“When we train rats to attend, we can reverse the downward spiral in acetylcholine production from aging, and up-regulate its natural production at the precise moment needed,” said Dr. Michael Merzenich the Chief Scientific Officer of Posit Science and Kavli Laureate in Neuroscience. “This is the first confirmation in humans that this more organic strategy can work, leading to higher levels of acetylcholine even in a resting state. Now, we need to perform larger studies in at-risk, pre-dementia, and dementia populations.”

The pilot, single-arm study collected baseline PET imaging on the production of acetylcholine from 5 older adults, who then completed a total 12 hours of computerized training on iPads (in 4-5 sessions per week of 30 minutes each, over 5-6 weeks), and, then, were imaged again. The PET imaging showed an upregulation of acetylcholine of 16-24% in four areas across the forebrain (right inferior frontal gyrus, left caudate nucleus, bilateral medial prefrontal cortex, and left lingual gyrus/Cuneus). This mirrored behavioral results showing improved attention.

The proprietary exercise used in the study presents a user with a target image, and then shows the user a series of images, with each presented for a split-second. If the presented image does not match the target, the user responds by tapping (a key or screen), but if the image does match the target, the user withholds a response (not tapping). The exercise is designed to be attentionally-demanding—driving both focus and suppression of distraction.

The exercise was designed by Dr. Tom Van Vleet of Posit Science and Dr. Joe DeGutis of Harvard Medical School. The acetylcholine imaging was conducted in the lab of Dr. Etienne de Villiers-Sidani of McGill University.

Two years ago at the same conference, researchers from the 10-year, 2800-person ACTIVE Study presented results that showed those who trained with an exercise licensed exclusively by Posit Science had a 29-48% reduced risk of dementia (depending on the amount of training and the categorization of dementia). Those results increased interest in the mechanisms of action that cause plasticity-based brain exercises to be effective.

“Just as physical exercise unleashes multiple mechanisms to drive better physical health, plasticity-based brain exercise drives many key mechanisms, in concert, to drive better brain health,“ observed Dr. Henry Mahncke, CEO of Posit Science. “Recent studies have shown increased white matter integrity, increased neural connectivity and efficiency, increased hippocampal activation, increased beta-band activation, improved performance in the Central Executive Network, and stabilization of the Default Mode Network. This first demonstration of increased production of acetylcholine is perhaps the most significant development, not just because of its application to Alzheimer’s, but to a host of other conditions as well.”

How We Think Changes as We Get Older 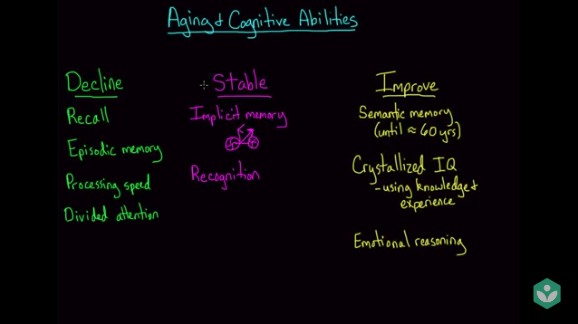